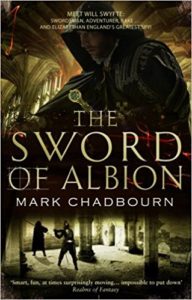 When you write a series of fantasies about swashbuckling Elizabethan spies, you don’t expect them to take on a contemporary relevance.  But here we are.

Elizabeth is on the throne.  A technology boom is underway.  We have a flowering of the arts and a rapidly growing capital city. 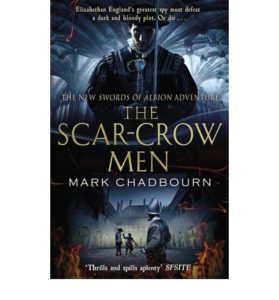 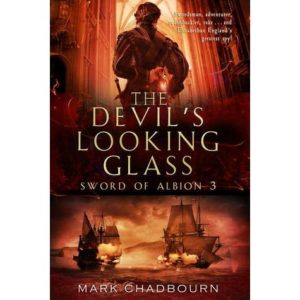 It’s the sixteenth century all over again.

As yet no supernatural enemies besieging Britain, and I’m still looking for our Christopher Marlowe, who appears in book two.  See for yourself how little has changed in four hundred and fifty years.  You can sample the books here:

The Sword of Albion

Two new reviews for the Sword of Albion books that I’ve just been sent:

“the plot just kept me turning, page after page…”

And The Devil’s Looking Glass:

“a cracking series…a great blend of history, action and supernatural elements and I think the attention to detail is pretty marvellous.”

Published today in the UK: The Devil’s Looking Glass.

The merciless sun boiled in a silver sky. Waves of heat shimmered across the seething main deck of the becalmed galleon where seven sailors knelt, heads bowed. As blood dripped from their noses onto their sweat-sodden undershirts, they muttered prayers in Spanish, their strained voices struggling to rise above the creaking of hull timbers flexing against the green swell. Harsh light glinted off the long, curved blades pressed against their necks.

At the sailors’ backs, the grey men waited in silence, still as statues, drawing out the whimpering men’s agony before the swords swept down. Ghosts, not there yet there, their bone-white faces were wreathed in shadow despite the unremitting glare. Oblivious to the sweltering heat, they wore grey leather bucklers, thick woollen breeches, and heavy boots, the fabrics silver-mildewed and reeking of rot.

Captain Juan Martinez de Serrano was kneeling on the forecastle, heavy brows furrowed as he watched the row of seamen. Even now he could not bring himself to look into the terrible faces of the ones who had boarded his ship. Aft of the Spanish vessel, the other galleon’s grey sails billowed and its rigging cracked, although there was no more wind today than there had been for the past three. Serrano lowered his head in desolation. What fools they had been. Though they knew the devils of the Unseelie Court were like wolves, the lure of gold had been too great.

Excellent review of The Devil’s Looking Glass in the latest Locus magazine. And they also take the time to praise The Sword of Albion/The Silver Skull:

“These characters tend to peer out from tangles of painfully twisted emotions. The plot can seem just as gnarled, with many turnings, terrors, betrayals, and revelations about its mingling, shifting worlds.”

You can find an extract from The Devil’s Looking Glass here. The book will be published by Bantam in the UK in April 2012.

Follow the links at the top of that page for a brief interview.

Here’s the cover to the third Swords of Albion book, The Devil’s Looking Glass, which is published in the UK April 2012.

It’s been very quiet around here in recent weeks, mainly because I’ve been pulling 12-hour days, seven days a week to finish up the final draft of The Devil’s Looking Glass, the third Swords of Albion book.

It’s now been delivered to my editors at Transworld in the UK and Pyr in the US.

Publication is scheduled for April 2012 in the UK. Not heard a date from Pyr yet. So tonight I will be having a beer or two to celebrate. And tomorrow…

Back to work on a new project.

Here’s a brief review of The Scar-Crow Men. The book is out in the UK in May.

I’m currently hard at work on the third book in the series, The Devil’s Looking Glass, with an expected delivery date of late June for publication in 2012.