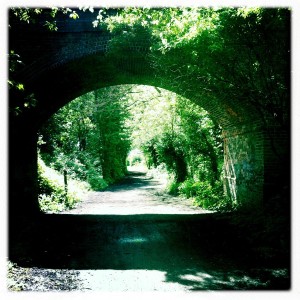 We tell ourselves stories all the time. Some are real and some are not, but they all help us make sense of the world.  I’ve always been particularly interested in the stories of folklore, really, since I was a child leafing through my parents books.  They’re very peculiar, folkloric tales, existing in some misty area between fact and fiction – because there was always someone, at some point, who swore they were true.

And folklore is a living storytelling experience.  Some of those tales go back hundreds, even thousands, of years.  But others are being invented all the time.

I live in an area that was once, in part, a blasted industrial landscape.  In some villages, waves of coal dust swept halfway up houses, spread by lorries trundling from the pits.  Many of the coal mines and their tunnels are so old, they’re unmapped.  Some date back to Roman times.  But now the area has returned to the greenwood.  That photo above shows the trees encroaching on the path of a former industrial train line.

The pits were capped, evidence of the mines washed away.  But they’re not forgotten.  Recently, stories have emerged of carnivore rabbits which climb trees to attack squirrels.  There have been several sightings, apparently.  These are, allegedly, the offspring of rabbits which originally found their way to the underground tunnels and were forced to adopt new behaviours to survive.  One of these included learning to love the flesh of rats to prevent themselves starving.  Now they’ve found their way back to the surface.

We also have a ‘black panther’, one of the Alien Big Cats (ABCs) which are regularly reported in different parts of the UK.  Private zoo escapees, natural species that have never been tamed – there are plenty of attempts at explanations.  The Beast of Bodmin is probably the most famous.  Our local cat has been seen several times, travelling along the old, abandoned train lines, like the one above.  In this way it can cover a wide area while keeping a wide berth of people.

There’s probably an entire thesis or two to be written about what these tales tell us about ourselves.  But I’ll just settle for the intrusion of the magical and otherworldly into the mundane.

And just as a reminder, The Eternal ebook will be going on-sale next week, but you can pre-order it at a ridiculously knockdown price.  Here’s the UK link.  Here’s the US and world link.