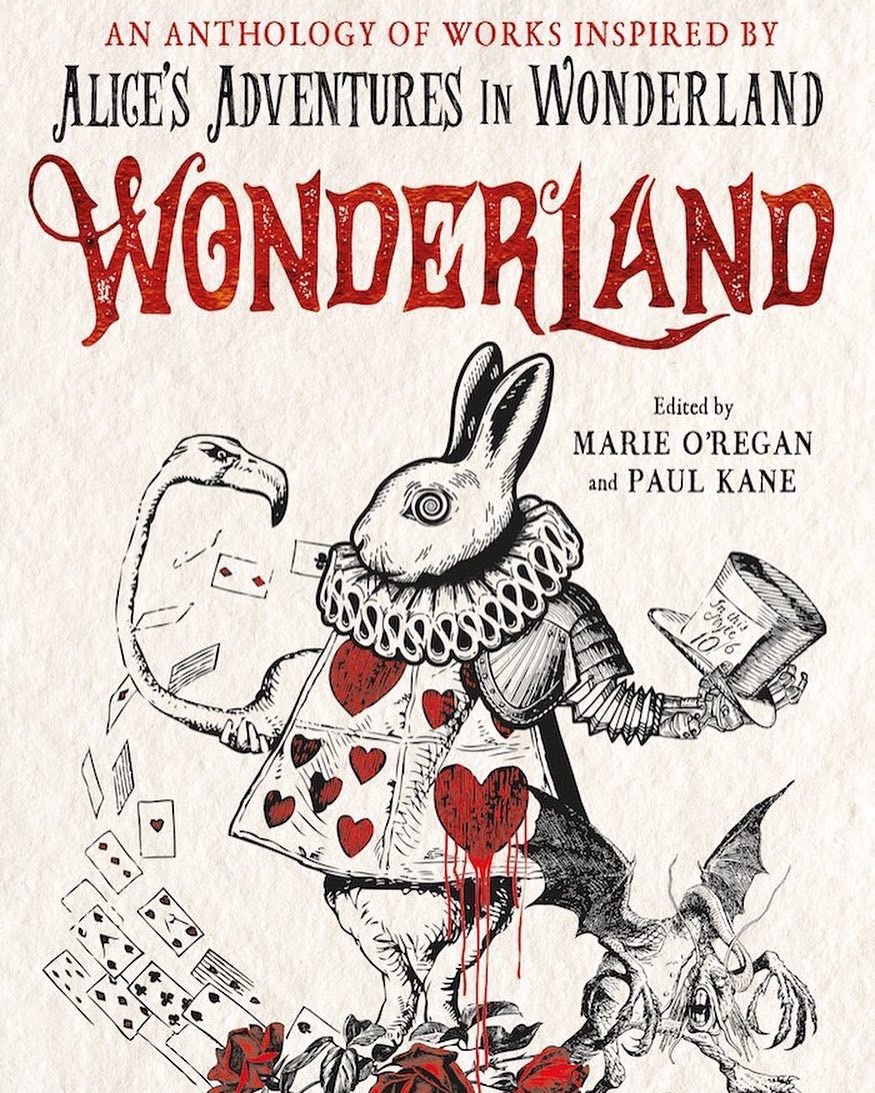 So, I am in this – my first fantasy story for many a moon. More to come…

Following the TV success of Game of Thrones SF Signal”s Mind Meld has asked several fantasy authors – including me – what books would make an excellent weekly series. Some interesting responses…

There are ethical problems wrapped up in writing historical fiction. Should you use a real, once-living person as a character in your fiction? Their lives reduced to nothing more than plot points and themes? In essence, a human being’s existence shackled to the pursuit of the writer’s own ego?

Would you want some future author to make you the bad guy in their little story, the walk-on joke, the mumbling idiot, the obstacle?

And let’s face it, we don’t even know what the people around us are truly like, never mind those who existed hundreds of years ago. In those cases, we often only have a few scraps of paper to sketch out the things they did, with little hint to their motivation.

This becomes even more of an issue in fantasy, where the historical characters are divorced from the realities of their lives. It’s something I’ve certainly struggled with while writing the Swords of Albion books, which utilise a host of real people from the Elizabethan age. To be honest, even after writing I find it hard to decide if it was the right thing to do. I justified it to myself by my attempts to make the historical figures as true to how contemporary accounts described them, but that still leaves a great deal of psychological gap-filling.

The Sword of Albion and The Scar-Crow Men are set around the Court and Government of Queen Elizabeth, but she plays only a secondary role. I have less interest in the cosseted lives of Kings and Queens than I do in the men and women who do their bidding.

The stories concern spies, who had, for the first time, become a powerful weapon of the state in this era. And so in the first book one of the central characters is the spymaster Sir Francis Walsingham, a dour, puritanical man who suffered much personal misery in his life, but who gave his all in service to the Queen. His successor in The Scar-Crow Men is Sir Robert Cecil, a clever, cunning politician who battled against prejudice and mockery for his hunchback and short stature – the Queen called him her ‘Little Elf’. These two men represent different approaches to power and control, one quite honorable, the other self-serving. They act as counterpoints to the flawed, vacillating central character, the spy Will Swyfte.

Swyfte’s friend is the acclaimed playwright Christopher Marlowe, a contemporary of Shakespeare who wrote Dr Faustus and Tamburlaine among other plays. He was something of a rising celebrity at the time. He may have been a spy (there is some evidence); he may have been gay. In the books, Marlowe is another counterpoint to Swyfte, a man slowly being destroyed by the dark business of spying and the demands placed upon him by service to the state. Marlowe allows the reader to see Swyfte’s strengths and flaws more easily.

Despite my antipathy towards the lives of Royalty, the fact that important people play important roles is inescapable in this era. The common man was mainly concerned with simple economic survival. And so, as Swyfte travels the known world in his spying, we encounter James VI of Scotland (and future James I of England), Philip II of Spain and Henri of Navarre, the future Henri IV of France. Each one responds – and responded – in different ways to their regal status, and again, each one allows us to see Swyfte in a different light.

Dr John Dee is a key figure in both books, and the third, to come, and he really is the link between the history and the fantasy. Dee, who tutored the young Elizabeth, was both a scientist and an occultist, an inventor and mathematician who communed with angels and cast magic circles. Many of the themes I’m tackling have Dee at their centre.

There are others – Sir Francis Drake, Walter Raleigh, the Earls of Leicester and Essex, the master criminal Laurence Pickering, the King of Cutpurses, who may or may not have been an invention of the Elizabethan equivalent of the tabloids. Each one was chosen carefully for what they said about Will Swyfte, in the same way that any writer chooses supporting fictional characters.

I hope I did them justice, but know in my heart I didn’t. No writer could.

On matters of meaning and a golden age of fantasy – at Babel Clash.

Over on the Borders Babel Clash blog, I’ve been putting forward the idea that it’s time for fantasy and SF to go their separate ways:

It makes me wonder, though, if it’s time for fantasy and SF to dissolve the marriage of convenience. They came together in an age when there was a limited number of speculative fiction books on the shelves and the two genres huddled together for support. But as Charlie Stross points out, they’re very different in outlook – one stares out to the world, one peers into the unconscious.

When a good number of authors and readers of one genre openly sneer at the other genre, that’s probably a good time to disentangle them at the level of marketing, conventions, societies and the rest. Fantasy has more in common with horror, and urban fantasy which straddles the two. And that would leave SF to be “pure” which a lot of its supporters seem to want.

Of course, members of the SF community who speak openly about that kind of thing might find it a double-edged sword. Fantasy thrives in sales terms, and those big secondary world epics that Charlie Stross mocks give a lot of bookstore cover to what may be perceived as the more challenging of the SF fare – especially at a time when three senior editors (two in the US, one in the UK) tell me they’re no longer really in the market for SF for sales reasons.

Over on his blog, Mark has incited a firestorm with the posting “Why Science Fiction is dying and Fantasy Fiction is the future”, which has attracted fierce responses from Charles Stross, Richard Morgan, Adam Roberts and many others.

Surely there is no finer sport than ramming sharpened stakes into the cages of the SF community!

And yet, there *is* an SF community, with reasonably definable boundaries and consumption patterns. In its natural habitat, the SF reader will graze easily across hard SF, space opera, military SF, literary SF, wherever both science and fiction combine.

There is no fantasy community, and this, I think, is where your initial premise breaks down, Mark.

There is NO connective tissue between what has been branded as urban fantasy and secondary world fantasy, anecdotally little crossover in readership, and generally very little love lost between the two camps. Urban Fantasy has more in common with the romance genre (always a big seller) and the romantic fringes of 80s horror, and is a better fit under the Paranormal Romance banner. Yes, there are fantastic elements, but horror is a sub-genre of fantasy, but we don’t lump that in when we discuss this issue.

Strip out “urban fantasy” and there’s not such a great disparity in sales between fantasy and SF. But that still doesn’t leave a fantasy community. There are a lot of authors writing broadly tales of the fantastic outside the secondary world area – the majority are never likely to have big sales (the area they write in – the huge sweep of the imagination – is too unfocused to be branded), but they have a consistent readership. Many readers of secondary world fantasy aren’t hugely interested in them, and often see them as part of a different, unnamed genre too.

What we now call secondary world fantasy is the only true fantasy community. It’s the area where the biggest sales lie because it’s built on the twin foundations of Tolkien and gaming, which provides a constant stream of new readers through the gates. (There’s probably an academic paper to be written on how many authors in this field based their works on their teenage and twenty-something gaming inventions…) More importantly, it has boundaries defined by the community itself.

Part of the sales decline is due to the intense, and accelerating, change in society, where communities are breaking down into increasingly small self-identifiable units. It’s something the music and TV industries have already wrestled with – there are no “rock” fans any more, but a vast number of tiny tribes that shelter under the rock banner. Viewing figures for TV shows plummet as the makers increasingly have to micro-target.

The challenge for the big publishers is how they’re going to build a business model that is acceptable to their shareholders when genres continue to fragment (in fantasy, say, to apocalyptic fantasy, heroic fantasy, magic-based fantasy, historical fantasy) with less and less boundary crossing and subsequently a lower ceiling of potential sales (ans: they can’t). It’s an issue that smaller publishers like Solaris and Angry Robot were specifically set up to tackle.

But in this area, I think, SF is better placed to thrive in the long term because its community is broader and more cohesive, and there is much more micro-boundary crossing to keep sales up.

The New Fantasy is a catch-all title for a specific, grittier kind of fantasy by Joe Abercrombie, Tom Lloyd, Joel Shepherd, James Enge, Justina Robson, Matthew Sturges, Chris Roberson and yours truly, according to Lou. Listen to the podcast to get the full picture.