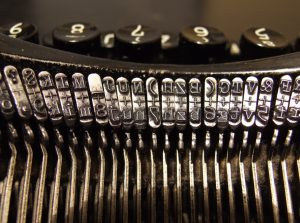 It’s a fantastic time to be a writer.  And that’s the problem.

There are opportunities everywhere – in self-publishing, particularly, via Kindle, or in this golden age of TV.  Sometimes it seems like every single person you encounter is publishing their novel on Amazon.  (A friend, an acclaimed UK screenwriter, was chatting to a street cleaner in his local town.  When he found out what my friend did, the sweep mentioned he was working on his first screenplay.)

Everybody.  Billions of potential writers, competing for attention.

It’s easy to get disillusioned.  How are you going to get noticed by that traditional publisher, or that TV commissioner when you’re just a face in that seething crowd?

You might as well ask, with all those men hoofing a ball around a park on Sunday morning, how does anyone get to play in the premiership?  Or with all the people slapping paint on canvas in the spare room, what chance of getting an exhibition at Tate Modern?

Nearly all that competition is going to fall by the wayside.  Why?  Wanting is not enough.  Once you grasp the deeper meaning of that rule above, you’ll realise that the way to get into this business, and make a living from it, is by maximising your talent.

That doesn’t mean learning your craft.  That’s taken for granted.  It’s about taking what skill you have and supercharging it so you surge past all those other people scribbling away.  And you do that by learning every aspect of your chosen business.

Throw away all the received knowledge of how publishing works, or TV or film.  It will kill you.  You’ll make choices based on that knowledge which will lead you into mean streets.  Everybody who works in those industries knows that on the inside they look nothing like they seem on the outside.

Find out why publishing with a small publisher – and some that are not so small – could get you nowhere.  Discover why finding an agent who’ll take you on may, in some circumstances, not be a good move.  Learn the first threshold you need to cross to get taken on by a publisher (it’s actually quite simple).  Realise why having the most amazing idea in the world and a fantastic script probably won’t get you a TV series commission.  Why your story isn’t being optioned by the film industry.  Why you can make just enough cash to keep you hoping, but never enough to get escape velocity into a writing career.*

Writers are a weird and often useless bunch, I’ve discovered over the years.  Some are so vehement that it’s “all about the writing” that they see learning about the business as selling out.  “The art will out.”  And by doing that, they end up killing their chance to write.  You only seem to get this kind of thinking among writers (maybe musicians too).  You won’t find many plumbers saying they’re not going to learn about the business – it’s all about the taps.

Others refuse to shake their imagined view of publishing, TV and film for the usually much more messy and hard reality. It’s a comfort zone thing – they’d rather have the fantasy.  That kills them too.  I’ve seen authors get a good publishing deal and end their days stacking shelves in a bookshop because they’ve refused to engage with the less rarified, less creatively-stimulating side of what they do.

(* I’ll get to all these things in the coming weeks.)