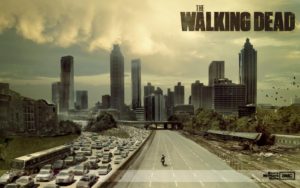 (Some minor spoilers here for the season seven premiere of The Walking Dead – no names, but some context.)

Halloween is just around the corner and like the coming of the Jack o’Lanterns a new season of The Walking Dead has launched.

AMC’s zombie apocalypse show has been a ratings juggernaut and a huge money-spinner.  I’ve watched it from the start because I like intelligent horror that has something to say about the world around us.  When the trappings of society are stripped away, humans become the real monsters and the survivors the real walking dead, well, that seemed like an interesting discussion to have.

The season premiere that aired in the US on Sunday and in the UK on Monday will be my last.

Some criticism has been levelled at the degree of violence in that episode.  While the series has always been gory, it’s generally been a fantasy violence, punctuated by the regular splitting of zombie heads.  But this episode stepped into a new arena of nastiness with the kind of brutality you could, in your darkest moments, imagine being inflicted on a loved one.  And the creators didn’t flinch from showing it again, and again.

And yet it wasn’t the physical violence that actually killed the series for me, as gut-churning as it was.  There was another form of brutality here.

I’m not thin-skinned.  I’m not afraid of violence, or death; I know both well.  I used to be a journalist.  I’ve seen dead bodies, murder victims, corpses brought out of fires.  I’ve watched an autopsy.  I’ve seen the wounds a gunshot makes, and an axe.  I’ve been in the centre of a riot, two actually.  I’ve watched my mother die.  And I stood beside my father a moment after his life ended.  That well of grief is hard to plumb.

This is the true failing of The Walking Dead: they disregarded the basic humanity of their viewers.

I imagine the show’s creators thought they were creating something sublime in this story.  Instead of wallowing in brutality for its own sake like the worst of the horror genre, they were going to show the true cost of violence, the humanity.  But they ended up doing the opposite in a ham-fisted attempt to make their point.

The death of a beloved character tells you everything you need to know about this world: that it is without pity, that survival is all, that some humans are nasty and venal and violent when pushed to their limits, and that others, the majority, are good and caring, that brutality is everywhere and that actions have consequences.

The death of a second beloved character, what does that tell you?  The same?  The same only louder?  What is the point – we already got that?

The gory murders of *all* the beloved characters, even if it’s only a vision in Rick’s head, does that tell you any more?  Does that provide a revelation as a reward for enduring emotional pain?  No, we understood everything we needed to know within the first five minutes.

An extended sequence where a father is put through one of the worst torments imaginable, to mutilate his own son to save the lives of others, what extra does that tell us?  That this world is *even more* pitiless, more violent?  If it’s not telling us anything new, there’s no point in it being there.

If it’s not telling us anything new, and it’s causing us emotional pain, it’s a betrayal of the viewer.  Sadism.  Causing hurt just because you can, and then walking away and thinking how clever you are that you have the power to manipulate the emotions of others.

One thing you learn as a writer is that you don’t need to show everything.  A look, the trace of a fingertip on skin, subtlety can be more devastating than every second shown in HD.  That’s because any work of fiction is a partnership: what the creators bring to it, and what the readers or viewers bring from their life experience.  And those readers and viewers are great.  They don’t need dollops of dumb because they have rich lives of love and suffering and anger and grief, and they access all those feelings with the merest hint.

And just to keep labouring this point, in my homage to the creators of The Walking Dead, if you’re hungry and someone offers you a peanut butter sandwich, do you want a spread of the filling or do you want it six-inches thick?  Does using the whole jar of peanut butter, so it cloys and clags and chokes, make for a better sandwich?  Because there’s more?

It’s just a TV show.  Except it’s not.  Stories are fundamental to the human experience because they move things deep within us.  And for that reason they have to be used carefully, and thoughtfully.

I don’t advocate censorship.  The freedom to tell stories is paramount.  But I am happy to exercise my right to walk away when I feel that risks taken in that storytelling have not been borne out by the final result.

The season premiere of The Walking Dead was a callous manipulation of the true emotional lives of viewers.  It was nasty and relentless and caused unnecessary pain, a betrayal of the investment every viewer had made in it.  And that, for me, was where it ended.

One thought on “Why I Stopped Watching The Walking Dead”