Walk across Britain on any of the old ways and you’re embarking on a mystical journey.  That’s the interesting thing about these ancient paths and tracks, some of which date back thousands of years, these holloways and drove-roads and trails.  They’re more than just routes between geographical points.  They reach back in time, back to the earliest days, and into the imagination too, into other worlds.  They’re places to explore the outer world and the inner landscape of the mind. 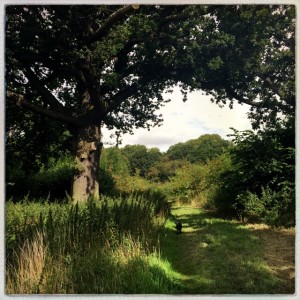 Every day I step out of my door and into the footsteps of people from two millennia ago.  The old Roman road, the Via Devana, lies beneath the grass and nettle, the oak trees and rowan, just beyond my hedge boundary.  Its one of the few unmapped and generally unexcavated Roman roads int he UK, originally running from Colchester on the east coast, westwards and then northwards to Chester on the west.  A few finds turned up by diggers in recent years has confirmed this stretch.  The rest is lost beneath near-two thousand years of human habitation.

On misty mornings and moonlit nights when I walk out on the road, the sense of those ancient days is palpable.  You hear the echoes of walkers long-gone in time.

I’m currently reading The Old Ways: A Journey On Foot by Robert Macfarlane, a lyrical account of his journeys along these ancient paths, the Icknield Way, the Ridgeway, and many more.  It’s a meditation on landscape, certainly, but also on history and ghosts, stories and the imagination, and how, by walking, we disconnect ourselves from the world and enter some liminal zone of the mind, perhaps even the spirit.  It’s highly recommended.