When I was researching Jack of Ravens, I spent a lot of time at the hugely atmospheric Iron Age (and probably much earlier) settlement of Carn Euny in Cornwall.  There’s a long sequence at the start of that book set when the village was still vibrant.  As long time readers will recall, it plays a crucial part in the wider story of the Age of Misrule.

Now Cornish band Kemper Norton have recorded a mini-album, Carn, based around field recordings at the location.  The heart of the music lies in the mysterious fogou, a stone tunnel running under the settlement.  There are only around fifteen known fogous and no one is quite sure of their purpose – simple storage, refuge in time of attack or a ritual site.  I’d recommend visiting – the atmosphere in the fogou is intense. 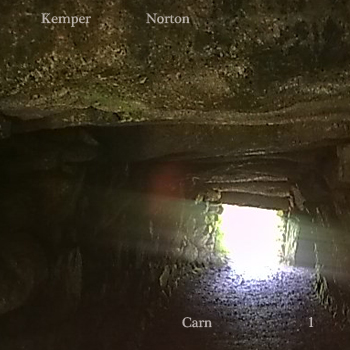 And Kemper Norton capture that haunting feel in this music.  You can download it for £4 or take a listen here.

Here’s artist John Picacio’s cover for the Pyr edition of Jack of Ravens, Book One of Kingdom of the Serpent. Out in March, with books two and three to follow in subsequent months.

For US readers, this is the final trilogy of the nine-book sequence that began with Age of Misrule. Jack Churchill returns, along with the Brothers and Sisters of Dragons, Fabulous Beasts, Celtic gods, Ragnarok, the Otherworld and the wrapping up of every single plot-thread wound over the series.

Can I suggest to all the readers who have been complaining about Gollancz’s failure to reprint the long-sold-out UK version to pick this up on import. It should be available on both Amazon and the Waterstone’s site.

Just heard from my editor in the US, Lou Anders, that he’s bought the Kingdom of the Serpent sequence – Jack of Ravens, The Burning Man and Destroyer of Worlds – to be published shortly by Pyr.

For American readers, those books will finish off the massive story that began with World’s End in the Age of Misrule, a trilogy of trilogies covering more than two thousand years of human history, three worlds – this world, the Otherworld and the world beyond death – and our greatest mythologies.

Maybe I’ll stop getting all those emails now.

There’s a review of Jack of Ravens here which raises some very interesting issues.

What I’ve been working on for the last few years is an epic story covering more than two thousand years of human history, numerous mythologies, a huge cast of characters with complex motives and inter-relations, an enormous range of antagonists, monsters, creatures and Fabulous Beasts, each with their own history, and a fair smattering of mysticism, psychology and philosophy thrown into the mix.

Unlike, say, The Wheel of Time, where the books are successively numbered so you know exactly which one to read next, I’ve told this fantasy tale over a trilogy of trilogies – the Age of Misrule, Dark Age and Kingdom of the Serpent sequences.

I’ve attempted to provide background information so new readers can drop into the story pretty much anywhere, but I think I’ve got to face up to the fact that they can’t. If you’re a new reader to Jack of Ravens, you’re just not going to get the depth, subtelty and interplay unless you’ve read Age of Misrule. You’ll certainly get a rattling good yarn, but it will lack what I intended as the author.

The problem is, the trilogies have each been packaged in such a radically different way that the casual reader would find it hard to tell that they’re all part of this massive canvas – although the excellent design for the Age of Misrule Omnibus has brought it in line with Jack of Ravens.

What I think I need to do now is get the word out more that this is one big, sprawling story. I’d hate for a reader to come to the books under the false pretences of thinking they’re starting a standalone trilogy (and only in fantasy can you use those words…) and be disappointed.

The paperback version of Jack of Ravens: Kingdom of the Serpent Book One is on the shelves from today.

The hardback sold out in record time, and I know it’s been a long wait for people keen to get their hands on a copy. Advance orders are running very high, so if you want a first printing it’s probably a good idea to buy early.

The story: modern day archaeologist Jack Churchill wanders out of the mists into ancient Celtic Britain. Desperate to get back to his own time, he embarks on a long quest through more than 2,000 years of history. But the denizens of Faerie are a constant threat…and a dark force waits for him at the end of his journey.

You can buy it from Amazon here for just Â£3.99 (currently).

The first review of my short story Who Slays the Gyant, Wounds the Beast from the Solaris Book of New Fantasy is here.

You may recall the story stars Elizabethan England’s greatest spy Will Swyfte from Jack of Ravens. There’s actually been quite a lot of interest in my swashbuckling hero. More soon, possibly…

I’ve posted an extract from Jack of Ravens: Kingdom of the Serpent Book One on my MySpace blog. The hardback and tradepaperback have sold out, but the mass-market paperback is published on December 2.

As I did with Age of Misrule, I’m making the extract free for anyone to post on their blog or website, as long as they include the copyright notice and a link where to buy the book. And if they sign up for Amazon Associate, they can make some cash from anyone clicking through that link and purchasing a copy.

All writers are privy to a big secret. They rarely talk about it among themselves, but when someone foolishly raises it, there are embarrassed smiles and nods and a few mumbled words of agreement. The reason is simple: to admit the big secret would mean admitting intellectually dangerous things to yourself and to risk the rest of the world calling you a crackpot.

So Iâ€™m going to tell you about here.

Writers are deeply troubled about the genesis of their stories. Not only that, they have nightmares about the reality of said stories, and their meaning and potency beyond the words on the printed page.

To illustrate, Iâ€™ll give you some examples from my own work. In Worldâ€™s End I wrote about the main characters visiting Glastonbury Abbey where they uncovered secret knowledge encoded in the design of the ancient Abbeyâ€™s floor. Due to the vagaries of the way I work, Iâ€™d already semi-written this scene before I went to Glastonbury to conduct the research on the detail of the setting. While I was there, I came across a book which discussed how secret knowledge had been encoded in the Abbeyâ€™s floor, but the knowledge and much of the pattern had been destroyed in a fire almost a thousand years ago.

Now I had never come across this before. I swear I made it up. Itâ€™s just coincidence, right? Itâ€™s the kind of thing that could have happened, so no reason why it shouldnâ€™t have happened.

Except the same thing happened again when I was writing Darkest Hour: something I was convinced I made up, came to light while I was researching Rosslyn Chapel near Edinburgh.

And it happened again during the writing of Jack of Ravens. Three times I have written about real things that were completely beyond my knowledge.

Most writers will tell you this happens all the time during the creation of a story. Stephen King has spoken (in On Writing, I think) about how he has come to consider his creative process more like archaeology: how the story is already fully-formed somewhere and he is simply digging it out of the sand.

Other authors have told me in very concerned tones about how what they have written has somehow started to affect the â€˜realâ€™ world. Graham Joyce speaks eloquently about near-supernatural happenings on a Greek island that echoed the story on which he was working, House of Lost Dreams. Robert Graves has written about the strange pile-up of coincidence and synchronicity during the writing of The White Goddess when books would mysteriously fall from shelves, open on the correct page with the information for which he had been frantically searching for days.

Both Alan Moore and Grant Morrison have spoken about the use of the imagination during the writing process as an act of magic, and itâ€™s difficult for many writers not to believe that. Strange, irrational things happen during the creative process. Thereâ€™s a sense of tapping into something else, and once tapped that something else coming into your life to haunt you for a while.

The guys at Memetherapy have published an interview they did with me recently. They asked a bunch of intelligent questions about how I approach writing and research, like “Writing novels has been described as hard and emotionaly brutal. Is that true for you? What was it like writing Jack of Ravens?” and I gave them answers.

It’s a Sunday morning, it’s sticky hot and unpleasant, and it’s the morning after England crashed out of the World Cup with their usual display of petulance and ineptness (yeah, yeah, I’m making myself an easy targetâ€¦). I’m thinking of going down the pub, but first I need to do thisâ€¦

My new novel, Jack of Ravens, is published on July 20. It’s the initial volume of a new sequence, Kingdom of the Serpent. It’s contemporary fantasy. And it’s got lots of stuff in it you wouldn’t expect in a fantasy novel. There. That’s the last of me pimping the damn thing here. Life’s too short, for me and you.

What you will find here, updated several times a week, are ruminations on a whole host of stuff that interests me, the occasional rants, and lots and lots of information on, well, just about anything that catches my fancy. Plus, you’ll find here the ‘special features’ section for the novel â€“ the background research I did (and the novel covers two thousand years of history, so there’s a lot of it), the location photos and extra story information that should make reading the thing a richer experience.