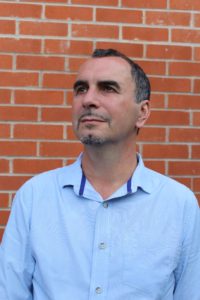 A two-time winner of the prestigious British Fantasy Award, Mark Chadbourn has written novels and stories which have been published around the world and translated into many languages. Born in Ashby-de-la-Zouch in the English Midlands from a long line of coal miners, he gained a degree in Economic History and went on to become a journalist, working for some of Britain’s leading newspapers and magazines including The Guardian, The Times, The Independent, The Telegraph, and Marie Claire. His writing career began when his first published short story Six Dead Boys in a Very Dark World won Fear magazine’s Best New Author award. It attracted the attention of agents and publishers.
His first fantasy trilogy, The Age of Misrule (World’s End, Darkest Hour and Always Forever) has received acclaim not only for its detail, but also for its academic research. An expert on British Folklore, Mark also studied volumes of research on prehistoric Britain, including the sites of Stonehenge, Avebury and Tintagel, as well as Celtic culture and neolithic life. He spent six months on the road touring Britain, mapping out a detailed path for his characters to follow, including not only famous historical sites, but also industrial estates, pubs, cafés, shopping centres and more.
He has been praised for the astonishing detail and realism he brings to his novels. The reason: the kind of research most people would go out of their way to avoid. For his first novel Underground, set in an isolated mining community, he worked hundreds of feet beneath the earth, crawling along tunnels barely two feet high, experiencing the same kind of brutal lifestyle as his coal miner characters.
His penchant for gritty research began when he was a journalist. On NATO manoeuvres inside the Arctic Circle, Mark slept in tents with the British soldiers in temperatures of -20°C, fired bazookas and drove tanks across the snowy wastes. He was also set on fire by an exploding lamp – and saved by a nearby snow drift.
While investigating the criminals who control the antiques trade in the UK, he was locked in a shop and threatened by gangsters, rescued only by a colleague who raised the alarm. On other occasions he has been at the centre of a riot, accompanied a Formula 1 racer at 250 mph around Donington racetrack, and he has gone undercover investigating criminal activity across Europe and America. When he was researching a movie script, he was invited to spend time with America’s controversial tabloid The National Enquirer, a trip that ended with him being shot at it in the Californian desert.
He has interviewed scores of celebrities – from Paul McCartney, Bob Geldof and Elton John to Tim Burton, Catherine Zeta Jones and George Michael – and has also worked in the media as a film and TV reviewer. Outside of journalism, he’s cleaned toilets, driven vans, worked as a fitter’s mate at a power station, and put Marmite jars on a conveyor belt.
Mark’s long-standing love of music saw him also turn his hand to managing bands – including a top five act – and running an independent record company.
In addition to writing novels, he is also a scriptwriter for BBC drama.
Mark has been described as ‘a contemporary bard – a post-industrial Taliesin whose visionary novels are crammed with remixed mythologies, oneiric set pieces, potent symbols, unsettling imagery and an engaging fusion of genre elements. His work is distinguished by breakneck but brilliantly controlled plots, meticulous research, deft characterisation and a crisp, accessible prose style.’
Mark now divides his time between London, New York and an old house in the heart of a forest.