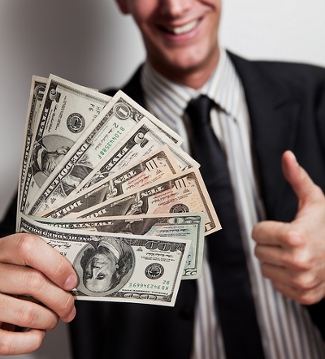 All you need is that one big break and you can quit the rat race and live your dream.

That’s the thinking, isn’t it? It’s also the mistake that just about every writer makes.

You’ve spent your life reading books, or watching films and TV, and you’ve decided the life of a writer is a great one. Better than wasting the days of your life in an office, or on the shop floor, or digging ditches. And you’d be right. It might not all be unicorns and stardust – it’s a job, what job is? – but it’s about as near-perfect as it gets.

You set your own hours. You don’t have a boss needling you in your place of work. More importantly, you get time. To reflect on life. To spend with your thoughts. To appreciate the world around you.

That’s a big deal. (And most writers will tell you, it’s more valuable than money.}

But money is still the key in the equation.

Everyone has responsibilities. When you’re in your twenties, it’s making sure you can pay the rent and eat. When you’re a little older, it’s, perhaps, a significant other, perhaps children. How many get to be self-indulgent and take a leap into the dark to launch that fantastic writing career?

And so the plan is to steal all your free time, in the morning when everyone is asleep, or late at night, or in your lunch break, and scribble away. And then you sell your novel/script and take all that cash, replace your salary, and ease seamlessly into the writing life.

That’s not a plan. There are no milestones, no measurable data, no paths to an achievable target.

It’s a fantasy. A child’s wish.

Most book advances are the equivalent of a year’s salary on minimum wage. You might think you can scrape by on that until the bigger stuff starts rolling in. You might be right. Or you might never be published again. You might sell one TV script and no more for years. To stake the existence of all those people who rely on you on a roll of the dice like that, is not kind, or wise.

So if you’ve got responsibilities, that’s it for the writing dream. Is that what I’m saying? There’s no way to gain escape velocity from the mundane life into the place where you’re making a living from writing?

There’s no simple way, but there is a clever way.

Forget the idea of a big pay-day as a mirage that will lure you away from the path you should be on. Once you ignore that impetus, you can start plotting the way ahead.

We’re in a new world now. You no longer need a ‘job’ like mum and dad. Increasingly, people are carving out a good living away from the nine-to-five. They get money *and* freedom *and* fulfilment.

The trick is building multiple income streams so you’re not relying on one paying gig that could fall apart. This is your portfolio. It’s what all 21st century writers are doing – and it is something you can start putting together while you’re in regular employment.

Start off writing for some online sites that pay. Work on an ongoing relationship. Self-publish on kindle. Do some journalism. Ghost write. Do ad copy. Teach a class at your local college. Write some comics. The thing here is, you don’t need to make a lot of cash from each individual job, but cumulatively a little becomes a decent amount.

There are plenty of tiny pots of money out there if you’re spry and you pay attention.

Keep a good account of earnings. Data is everything. Once you can see you can pay the month-to-month bills you’re close to take-off. And then when you do sell your book, or a script, or get a pitch accepted, or get to write an episode of Doctors (the entry level for screenwriters and who accept *lots* of new writers every year – £4,700 for a half-hour script and you can do several a year), you’re ready.

Even so, there’s still going to be one key moment when you have to take the big decision: stay where I am or take a leap into the unknown?

Question any person who’s found their way into one of the glamour industries, or any successful person anywhere, and they’ll tell you that at some point they were faced with risk. Taking the risk – a calculated one, of course – was the key factor that moved them out of the pack and into the front-runners.

There is no safe path to being a success. There is no easy road to making a living out of writing.

But if you treat it like a business, building your client base, you can minimise that risk and dart through the open door.