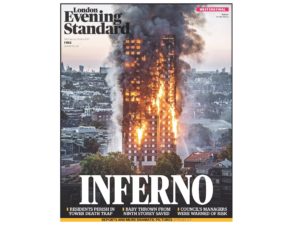 Everything has changed.  That’s how it feels in London right now, not a million miles away from the tower block catastrophe that has horrified the world.  I’ve never experienced such rage against politicians, from all parties.

This disaster should never have happened.

In an age of tragedies, what happened at Grenfell Tower has hit home in a visceral way.  The death count continues to rise – it could reach 150 – but the shock lies in the way those people died.  Grenfell resonates as a symbol of the malaise that grips the 21st century world.  Where money counts more than human beings.  Where the people we elevate to guide and protect us are incompetent, venal, or simply not up to the job, however well-intentioned.  Where it’s possible to make decisions without caring about the consequences.  This is the age of the shrug and move on.

No longer.  Prime Minister Theresa May – who seems to have a problem with empathy – was led away from a crowd of angry residents by her bodyguards. But so was London Mayor Sadiq Khan from the rival Labour Party.  And new Labour MP for Grenfell’s Kensington constituency, Emma Dent Coad , was attacked by residents for trying to blame the Conservatives when it emerged that as a councillor she sat on the committee which scrutinised the inferior work on the tower block that led to the fire.

You can hear it on the tube, in the pubs, everywhere you go.  People have had enough.  After the Brexit referendum, the Scottish referendum, years of austerity, and multiple elections, there’s a growing feeling that politicians are part of the problem not the solution.  Disrupting lives for ideological reasons, throwing the country into chaos for no obvious reward, dividing communities and families and friends, and leaving a trail of misery in their wake. Hobbyists who love the cut and thrust of the grand game while everyone else pays the price.  All parties, all politicians.  No one escapes the judgment.

Something has to change.  And if this mood continues on the streets of Britain, it will change, and fast.